Calligraphy is Not Dead!

Calligraphy comes from the Greek word kalligraphía, whose root words are kallos (meaning “beauty”) and graphein (meaning “write”). Back in the olden times, it was a tool for communication, but it was also an art practiced in many languages in various cultures. Some examples of languages that practice calligraphy as the art of beautiful writing are Arabic, Persian, Indian, Mongolian, Chinese, and Japanese Sometimes calligraphy is used as a substitute for “regular” art. In Islam, it is forbidden to paint portraits, hence, why Arabic calligraphy boosted in importance and sophistication. Islamic calligraphy has been used from architecture to coin design, with beautiful writings of passages from the Qur’an, the holy book of Islam. In Chinese history, calligraphy is seen as one of the highest forms of Chinese art. What you wrote is as important as the way you write it. The history of Chinese calligraphy is as long as that of China. It’s more than just a showcase of the abstract beauty of lines, but a way of self-expression and preservation of culture. 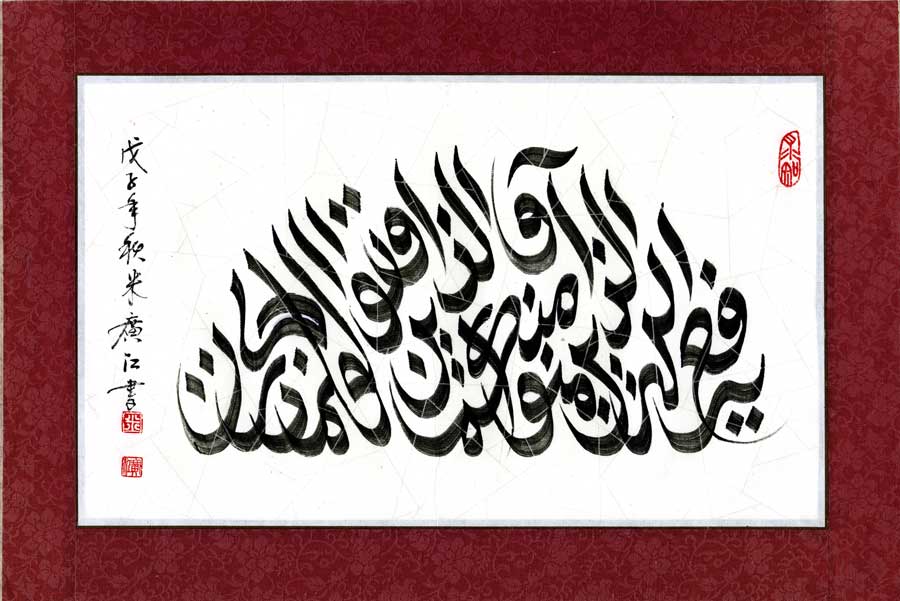 An artist by the name of Haji Noor Deen Mi Guang Jiang has fused Islamic calligraphy with that of Chinese. He works to write Arabic using traditional Chinese calligraphic brushes and techniques. Born in 1963 in the Shandong Province of China, he is a renowned master of this art form. He’s the first Chinese Muslim to be awarded the Egyptian Certificate of Arabic Calligraphy. Haji Noor’s work has created a new world of calligraphy, much like J. K. Rowling has created a new world for witches and wizards. His art falls under the subcategory called “Sini”, which is a Chinese Islamic form for Arabic script

His work has been displayed in galleries and museums around the world, often known as the first Chinese/Arabic artist. Visit him on his website for more details.

As an added bonus, here are some modern calligraphy art to soothe your senses.

Be right back, I am going to find myself a brush, pen, and some ink.

Having low moments and experiencing negative feelings is not uncommon. But it’s the expression of those thoughts that will always help. This is what the University of Notre Dame aims to do this week.

From Monday (2/5/16) to Friday (6/5/16), the university is holding Art Week to raise awareness of student mental well-being through creativity. Notre Dame students will showcase their talents in acts that they have worked to bring to you. They range from performance arts to stand-up comedy. During this colourful week you will also get a chance to:

Each day will begin at 11:30 am and end at 2:00 pm (daily Mass will occur from 12:30 pm to 1:00 pm). This is a great event if you are interested in different forms of creativity, want to perform and support others performing or just want to have an enjoyable time (or everything above!)

Every year most universities dedicate a week to bring together their students. What unites us is our passion, inspirations and hard work. So come down if you’re free and join the University of Notre Dame students in raising awareness of mental health concerns. See you there and have a great week!